Below is a picture of Harry Clarke with his second wife as his granddaughter Karen Wright remembers him. Karen is helping us with this project. 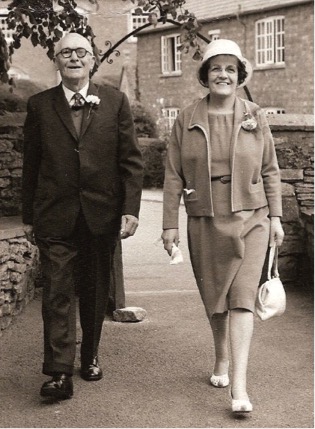 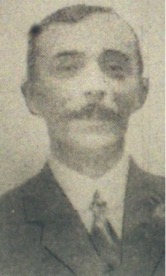 About a month it was reported that Private H. Clarke (Kettering) of the 1st Northants Regiment, was missing. An intimation has now been received by his wife from the Infantry Record Office, Warley Station, to the effect that her husband was taken prisoner during an engagement at Armienteres, and is now at Wittenberg.

Pte. H. Clarke is a native of Kettering and was one of the local Gleemen. He was a reservist and had a year to finish his time before he was called up, and he went over to France with the Regiment in August. It is remarkable that the last letter was dated 21st December, and in that he stated that he was going on all right, and was quite well. It seems that that was the very day he was made prisoner.

Mrs Clarke, of 44 School-lane, Kettering has received a postcard from her husband, Pte. Harry Clarke, who is a prisoner of war at Wittenburg. About three weeks ago we reported that he had been missing. He had served in the 1st Northants about eleven years having only about a year to serve when the war broke out. He went over to France with the first batch in August and experienced a good deal of fighting judging from the letters he sent home. The postcard received this Saturday morning was the first communication received from him by his wife since December last. It states: “I am in the best of health and spirits, and hope you are the same. I was very pleased to receive your letter. I received a parcel from the Gleemen, and I hope you will thank them very much. Send me weekly a parcel containing two currant loaves and some tinned ……. such as golden syrup, chocolates, etc. and don’t forget Woodbines and scap.” 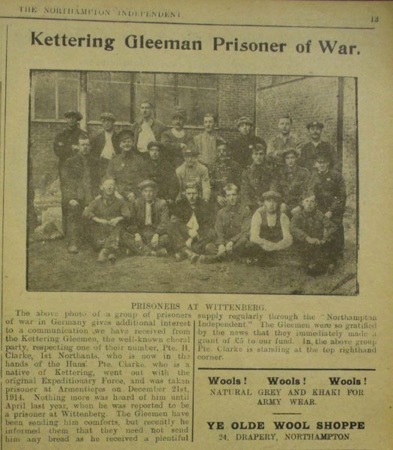 Mrs Clarke has three brothers serving the King and Country – Colour Sergeant W Dawkins, who is in the Royal Army Medical Corps (Canadian Force), in France; Pte John Dawkins who was wounded in France on May 9th, and is now in hospital in London, having had his leg broken by shrapnel; and Pte. Jas. Dawkins, who is engaged with wireless signalling with the 2nd Leicesters in the Persian Gulf. The last named went from India, and seven years have elapsed since he was at Kettering. They are sons of Mr. William Dawkins, a well known resident of School-lane, Kettering.

JACK OF ALL TRADES

“I ought not to stand still for a job” declared Pte. H. Clarke of School-lane, Kettering, an ex-prisoner of war to a representative of this paper one day this week, “for”, he added “I have had a good apprenticeship in farming, mining, and bricklaying, to say nothing of being trained to be a German soldier.”

It was on Christmas Day 1914, that he was taken prisoner of war in Armienteres, and he will never forget it. “We went into action”, he said, “one December 20th, and fourteen of us got cut off. Expecting to be relieved, we lay low, in the same set of dugouts as some Germans. You can imagine how we felt. We dared not go to sleep for fear of snoring, for we could hear the Germans singing and talking less than fifty yards away. A machine gun was within thirty yards of us. The water was all consumed on the first day, and nearly all the food. We lay without food for food for three days, and as no relief came we could stick it no longer. The German officer who spoke English declared he knew all along we were hiding there, and that we should have starved on. On that eventful Christmas Day we felt the pangs of thirst to such an extent that we picked up ice and sucked on it. The German officer was very good in handing round his water bottle when he found us in that plight.”

An interesting story was told of his four years’ experience in Germany. “It was at Geesen {Giessen} Camp that I learnt German drill. There were a thousand of us altogether, nearly all French; and the Germans expected us to “jump to it” as easily as if we understood their language. The discipline was very strict. We had to be careful in saluting with the proper hand; they do it differently than us. At Wittenburg, there were two or three thousand prisoners of war, mostly Russians, and as soon as the fever was over {referring to the Typhoid outbreak} they sent us to build a big factory. We were put to all sorts of jobs. One day I should be a bricklayer; the next day I might be sinking a well.

“FED UP” WITH SOUP

“We didn’t want any knives and forks, he remarked; “but a spoon was essential. I have had enough soup to last me a bit. They put in it turnips or carrots. Very rarely did we see a potato. As for meat, it was out of the question. I can confidently say that the only food that kept us alive was that sent out to us. In fact the conditions in the camp were bad in every way. They would not give us a bit of soap or a change of linen. Each man wore the same shirt from the beginning of the war until April 1915. But when captain Vidal, R.A.M.C. came thing began to get better; and they gave us a shirt apiece.”

My next experience of note was as a worker on a farm. Fifty of us, all English, lodged in an empty farmhouse, and you can guess we were pretty crowded. We slept all over the place. The boss was a big landowner, and the inspector a short smart fellow. No, I cannot give you any wrinkles about farming; you see I knew nothing about agriculture before I went to the war. But I imagine our agricultural workers would not look very pleased if they had to work from 6 a.m. to 8 p.m. at 3d. per day and could not strike. The only consolation was that the food on the farm was better than that in the camp, though it was nearly all soup.”

Concerning the hardships of the people he said “We began to understand a bit of their language, and found during the last two years that their condition was bad, and getting worse. They were short of fats – of butter and margarine. The people were poorly clad and whilst there was a shortage of everything, prices were awfully high.”

“It was at Merseburg that we endured the greatest suffering. The winter weather was exceedingly cold, and they would not allow us to have either coal or wood. Sometimes the men managed to get a piece of wood to boil the kettle for tea, or to warm themselves, but they were punished. Two or three thousand were there and we helped to build another big factory. I have walked miles as an exercise outside the wooden huts, with the object of keeping as warm as possible.”

“While we were there, they sent for two Englishmen to go to a coal mine, and I was one of them. You may guess how I felt as I had never seen a coal mine before. Nearly all the workers were prisoners of war; very few civilians worked at the pits, the majority having gone to war. It was a curious sensation, and I got 8d. a day – just enough to purchase four cigarettes. The Germans did not like us English being there; the rest were French, Russians and Poles. All the time they were threatening us with their revolvers, and trying their hardest to get us into trouble. For instance, they declared that we were not walking quick enough and pushed us about. If we retaliated by striking back, as we were often tempted to do, we should have been shot. It was a dreadful position to be in and required the patience of Job. The food there was not fit to eat; so we refused to touch it. We simply lived on the English parcels. The sanitary arrangements were awful.

“Never will I forget the time we had when we heard that the armistice had been signed. We all refused to work – French, Russians, and all the rest. Shouting at us proved to be ineffective. Then they tried to coax us. “We will give you 2s a day” they said, “and a ticket to go out at night.” “Too late,” we said, “you should have done that before.” We never returned to work. They said “If you do no work there will be no coal for the engines to take your friends back,” and we replied “You have plenty of soldiers; let them get the coal.” Then we knocked the barbed wire down. Ours was the last camp to be cleared, for we were there until Dec. 30th, living on food from England. Here is a programme of a concert we held on Dec 13th 1918 at Altengrabor {Alten-Grabow}, where there were 5,000 prisoners of war, including 900 English. Amongst the artistes were a Scotch comedian, serio-comics, light comedians, patter comedians, in fact ever so many comedians, and one sentimental. To top it all we had a French play. But that was nothing to the International football match – English vs. French and Belgians. Of course we won.

RELICS OF THE TIME

“And what do you think of this photograph of the fancy dress parade? On attired as a German comes from a village the other side of Northampton, and another representing a Frenchman belongs to the Northamptonshire Regiment. Prizes were given for the best decorations in the barrack rooms. And what a Christmas dinner! The parcels came in very useful. A bottle of Bass stood in front of me, but not for long; I had not seen anything like it for four years. Here is a photo of the church, built by the prisoners of war where we had the Christmas service and a collection for the fund for the graves of the boys we left behind.”

“You should have seen the sports,” he added. “There was a blindfold boxing match, a crawling race, a backward race, and such like, and a comic football match; so you see we made the best of it.”

Pte. Clarke is a native of Kettering, and was employed by Aquascutum Ltd., before he joined the Northants Regiment in 1903. Upon being called up, he went to France with the regiment the month in which the war broke out; therefore he has had a long as well as memorable experience.