I went to see The Muddy Choir on the 24 October when it was performed in the Henry Morris Hall. I was very excited that a new piece had been created by the renowned Theatre Centre, having enjoyed their previous work.

The play tells the story of three soldiers, Will, Robbie and Jumbo, who are thrust into a landscape markedly different to the playing fields and estates of their Sunderland home. When the trio’s singing causes a disturbance up the line they receive unwelcome attention from their commanding officers.

The show was alive with strong, captivating performances by all three of the performers. It was also deeply moving and, on many occasions, tested the emotions of the audience, with some looking moved to tears at times, particularly at the heart-wrenching scene of Jumbo’s death.

Not long after the show, I wrote to the Theatre Centre asking what advice they would give about what A-Levels to do to get into acting, and Sarah from the Theatre Centre replied saying, ‘An A Level in Theatre Studies gives you a good grounding in theatre practice and techniques, so I would definitely recommend that.’

The Muddy Choir was a truly stunning and memorable show with not a single weak member of the cast. Whilst watching it, I felt very inspired for the last part of my GCSE Drama. For those reasons I’m giving The Muddy Choir 10/10. 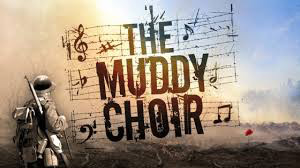